The Tale of Two Banners 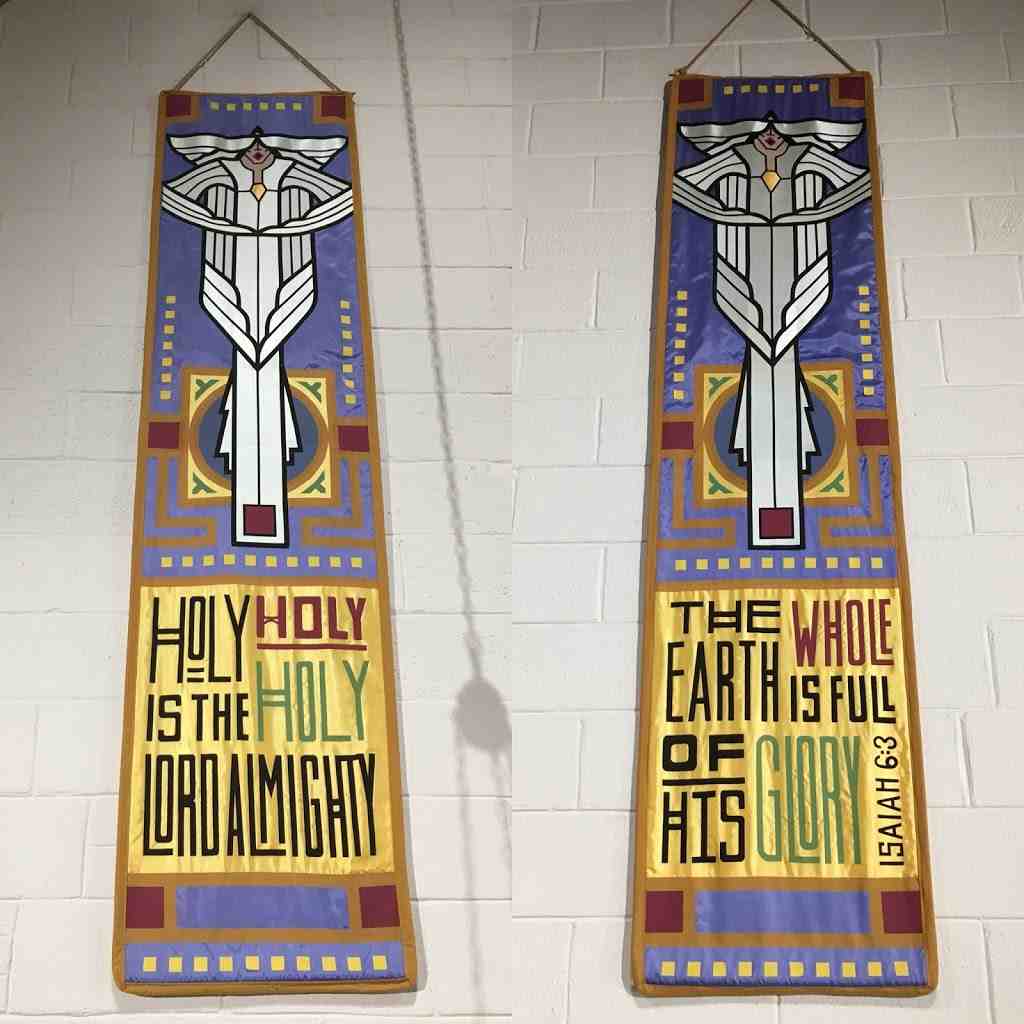 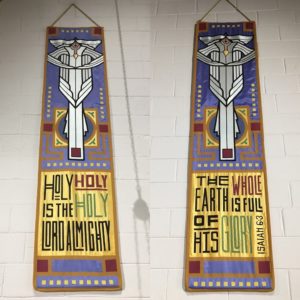 Only recently have I come to full terms with the church’s role in my spiritual life as well as my life as an artist.  Growing up, the church was one of my first and only consistent encounters with aesthetic beauty – the order and seasonal colors of the liturgy, the banners, the stained glass windows, and the rich musical history, dating all the way back to Johann Sebastian Bach and beyond.  So it makes  sense that as an adult, my creative medium is quilt-making, the elements of which are fabric, piecing, color, and composition.

In 1998, the same year I started my first quilt while living in Yountville, California, I returned to the Midwest after an eight year post-collegiate stint living west of the Missouri River.  I landed at my parents’ house in a small college town in west central Illinois.  It was a far cry from the Napa Valley, but with the proximity of the college, I succumbed to both internal and external pressures to achieve a full-fledged conventional career.  So, based on a personal history of a congenital cleft lip and palate, as well as a former girlfriend’s successful completion of the same, I decided to pursue a Master’s degree in Speech-Language Pathology.  I got as far as a post-baccalaureate (read: useless second Bachelor’s degree), but dropped out halfway into the first semester of the graduate program.  Throughout all this upheaval and general malcontent, I continued to make quilts.  They were my solace and my sanity.  In the meantime, I had also volunteered to make two banners for my parents’ church, Immanuel Lutheran.  The designs were mine, but inspired by and based on the work of Scottish architect and artist, Charles Rennie Mackintosh.  The two banners were each 3 feet wide by 12 feet high, designed to flank the altar.

During this same time, I was meeting one-on-one with the church pastor in preparation for membership in the church – something which seemed redundant and somewhat patronizing in light of my 2nd-8th grade St. James Lutheran Day School education; my Lutheran Church-Missouri Synod (LCMS) district-level church youth leadership position in high school; and a year of pre-seminary study at Concordia (Lutheran) College in River Forest, Illinois.  Wasn’t I already Lutheran enough?  One of the pastor’s pre-requisites for full membership, which would include my being welcome to take the sacrament of communion, was that I denounce my sexuality as a self-identified gay man.  Of course, there was some level of hair-splitting, like how I could be gay, I just couldn’t act on it.  Well, I tried.  And I tried a little longer, but quickly realized how absurd such a request was, let alone any attempt to acquiesce to it.  Once I shared my conclusion with the pastor, he swiftly informed me that I was not welcome to become a member of the church, nor participate in the sacrament of communion – in this, the denomination, faith, and doctrine deeply rooted in my own as well as my family’s history.

And so the banners…which I’d been working on this whole time.  I was faced with a tough decision: abandon the nearly-finished project, or take the high road and complete them.  I came to understand that I wasn’t making them for any particular individual, church leader, or denomination.  I was making them for a greater purpose, which was to celebrate and honor the Divine, and thereby inspire and speak to the higher self of anyone that might encounter my visual offerings.  I am proud to say that after twenty years, the banners still hang at Immanuel Lutheran church.  I recently received a call from one of the members of the church’s altar guild (who also happens to be my first cousin once removed, by marriage), asking about how to make a minor repair to one of them.  Over the years, she has reported on how much the banners have meant to members of the congregation.  I am sure the banners have witnessed numerous baptisms, weddings, and maybe even funerals.  Moreover, I have found my true calling, my art.

Note: a few years later, the same pastor that had denied my membership in the church, made an Oral-Roberts-style public confession that he’d had some kind of unholy thoughts about a? some? all of? the young women in the college town he served (Immanuel Lutheran maintains both a town and gown church campus).  I think he took some kind of leave-of-absence along with his mea culpa, but according to the church website, he has served and still serves as pastor since 1997, just one year before my encounter with him.