My college education began at a conservative Lutheran pre-seminary program at Concordia College in River Forest, Illinois.  After a disappointing experience in high school geometry, I abandoned my dream to be an architect, and my singular focus became what we called “the ministry.”  From 2nd to 8th grade, I attended a day school of the same conservative branch of the Lutheran church.  It was an overall good experience, with a small tight-knit class, a few with whom I remain friends some 45-plus years later.  When I matriculated to the local public high school in 1981, I went from a class that averaged about a dozen to one of over 600.  I never adjusted.  I did not have a positive high school experience – short of my extraordinary English and German teachers – one of whom sexually assaulted me only a month after my 18th birthday on a visit with him before I left town to attend college.

I started my freshman year of college damaged.  I was also dragging along the unprocessed baggage of being separated from my family at 7 months old and raised with a false identity in a family of strangers.  My first off-campus job was child care for the Coates family, a typical mid-1980’s upwardly mobile, two-child, one-dog family.  They lived on the corner of Chicago and East Avenues in Oak Park, Illinois, in a house designed by one of Frank Lloyd Wright’s apprentices, just two doors down from Wright’s commission that would spawn his tragically fated affair with Mamah Borthwick Cheney.  Mention of the family dog Molly in the job posting had piqued my interest in applying for the position.  I couldn’t have known that it would lead to meeting the first woman who revealed herself to me as a “birthmother,” a term I’d never heard up to that point.  I found my mother just four years later, after over twenty years of separation.  The Coates would eventually divorce.

My pre-seminary plans fell apart in one fateful moment in the first and only theology class I would take, Old Testament.  I don’t remember the question I asked, just the response from the professor, who all but gathered sticks to burn me alive as a heretic on the spot.  That was it, this wasn’t for me.  Thankfully, I was simultaneously enrolled in both Art History and later Studio Art, taught by Professor Darlene Fahrenkrog, who glided cheerfully through the lower level of Kretzmann Hall with her hands wrapped around a mug of piping hot water, while declaring mantras of positive persistence.  This was when art started saving my life.

I remained actively involved in church youth group throughout high school, advancing to a district leadership position.  Along with a limited tenure in Marching Band, one of my few extracurricular activities was Art Club, the staff sponsor of which would later jump to his death from the Quincy Memorial Bridge.  He was a rotund man.  I’ve since imagined what a horrible splash, his lifeless body drifting downstream to Lock and Dam 21.  I didn’t take my first art class until the last semester of my senior year. The Viet Nam war veteran turned art teacher unabashedly discouraged me from attending art school.  I’m not sure if his unsolicited advice was based on the sheer impracticality of such a commitment or my lack of talent, but nevertheless I would.

The spring of 1986 was spent plotting my escape from Concordia in my single dorm room, where I kept my spirits up with episodes of Late Night with David Letterman.  Sandra Bernhard’s guest appearances were my favorite.  I met her on three separate occasions years later, graced with an on-stage kiss at a performance in San Francisco.  I started my freshman year with a roommate, Michael Schafstall from Columbus, Indiana.  Roommates were paired by the college and encouraged to exchange letters prior to the start of school.  As dutiful Lutheran boys, we did.  When a wallet-sized senior picture of a handsome blonde with an athletic build and dangerous smile fell out of his letter, my heart fluttered.  But things didn’t go so well once we were roommates.  Michael snored, talked in his sleep, and was bewilderingly contemptuous of me.  Years later I received a letter from him, which included my original letter to him.  He explained that he was gay and married to a dentist in Carmel, Indiana.  He apologized and described what had been a young man afraid of being outed by his association with me, despite the fact that I had not yet come to terms with my sexuality as a freshman, though my dorm room was beginning to show the signs.  It was sparsely decorated with anything I could afford from the flagship Crate & Barrel store on Michigan Avenue, and a Bruce Springsteen Born in the USA poster, prominently featuring his rear end.  By May, I was accepted to enroll at Washington University in St. Louis, Missouri, a return to my birthplace.  I graduated with honors in May of 1990 with a Bachelor of Fine Arts degree in Photography.  My first apartment after I graduated from “Wash U (it’s colloquial moniker) was on the corner of Osage and presciently named Iowa Avenue.  I later discovered it was only 10 blocks from the apartment on Virginia Avenue where in 1967-68 my mother and grandmother had done their best to care for me, until they no longer could.

My first teacher was also my first best friend.  A retired teacher in her 70’s, she lived across the street from my adoptive family in LaGrange, Missouri.  In true small-town southern style, we simply referred to her as Miss Vira, and her sister, Miss Grace.  I spent countless hours under her tutelage and watchful eye, expanding my vocabulary with flash cards while eating popsicles from the deep freeze on her back porch.  I still have the painted red wooden chair where I sat at a TV tray for my lessons with her, a relic from the rural one-room schoolhouse where she’d taught.

God bless all my teachers past and present. 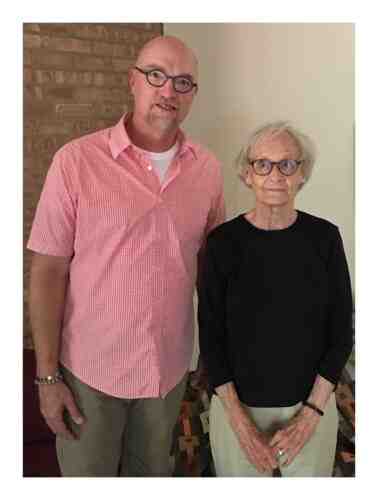 August 10, 2019 with Darlene Fahrenkrog at her home in Chicago.  My quilt One Life is seen in the background.  I gave it to her as a thank-you gift.